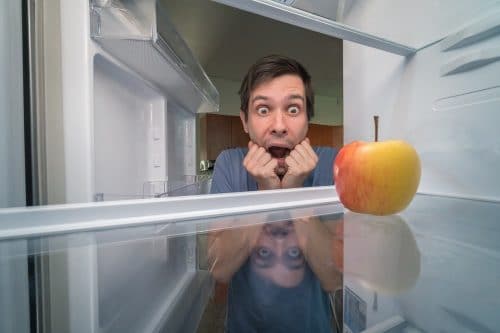 Workplace Kitchen Thieves!
Has Your Lunch Survived Their Wrath?

Your lunch break is scheduled for 1pm.

These last 5 minutes feel like the last kilometre of a 4 hour walkathon. You inch forward…

Hallelujah! It’s finally time to go and appease the ‘Hangry’ Monster that’s been growling from your stomach! You waltz to the lunchroom and fling open the fridge with the enthusiasm of a teenage girl seeing her boyfriend again after a gruelling 24 hours apart. Only to discover… YOUR LUNCH ISN’T THERE!

According to a recent study by an Australian food manufacturer, more than 30% of respondents admitted to stealing a co-worker’s lunch.  Worse still, 13% admitted they’d be tempted to steal someone else’s lunch purely because it looked better than theirs. These aren’t down-on-their-luck-can’t-afford-lunch colleagues we’re talking about, or even the chronically disorganised among us who have forgotten all forms of sustenance again. Nope, there appears to be a small army of shameless lunch thieves who will eat your food just because it looks better than theirs!

A quick internet search reveals that the problem of food theft in communal work lunchrooms is a recurring, exasperating issue. ‘wikiHow’ features an article called ‘How to catch a lunch thief’ in which it details 4 approaches to deal with lunch theft. Or there’s the preemptive ‘Strategies for Deterring Office Lunch Thieves’.  Tips from this one include 1) taking food that requires some assembly,  2) not taking generic prepackaged food to work, and  3) putting your lunch in an opaque container as this will apparently lessen the chance of someone swiping it because they can’t immediately see what it is.

So far has the scourge of lunch thievery gone that some creative companies have even gone so far as to create ‘Theft Deterrent Moldy Sandwich Bags’. These plastic ziplock bags come with fake mold printed onto them so that your sandwiches instantly look moldy.

Now, we reckon there are three types of people reading this article – the blessedly unaffected, the frustrated victims, and the guilty lunch thieves themselves. For the 1st and 3rd group of people, the idea of fake mold sandwich bags may seem hilarious. However, for those who have been victims (often repeatedly) of lunch theft, it’s no laughing matter.

As Inc.com points out, lunch theft is one of those seemingly small issues that has a big impact. At the heart of it, having your lunch stolen erodes your trust and faith in your colleagues. How can you trust the people you work with to truly have your back when you can’t even trust them to not eat your lunch?! The Daily Mail in Britain reported that a full 25% of employees rate having their food stolen as their biggest workplace gripe.  It’s such a relatively small thing, but having your lunch stolen can significantly mess with your day, and even your overall workplace satisfaction.

Here at Gecko Vending, our part of the solution is to provide healthy, fresh lunches in convenient vending machine format. If lunch thieves are tempted because someone else’s lunch looks better than theirs, they’ll surely be enticed instead by the award winning range of finely crafted, freshly prepared YouFoodz meals. Contact us today to discuss the options for your workplace.

And your part of the solution? If you’re the problem; if you’re one of the staggering 37% of people who have admitted to stealing a colleagues lunch – Stop it! It’s not nice, it’s not fair, and there are better options that feel good for your stomach and your conscience.

Finally, to the victims of lunch theft, our commiserations. With the addition of a YouFoodz fresh vending option at your workplace, if your lunch does happen to get stolen again, at least you’ve got a healthy, tasty, easy replacement option. (But seriously office lunch thieves, just stop it!)